In earlier posts I suggested that we can use the word “altruism” to refer to the phenomenon of people being concerned about the positive welfare of others. In this post I argue for the importance of a distinction between having (‘superficial’) altruistic concerns and (‘deep’) reasons for such concerns.

Let’s start with some fine art: 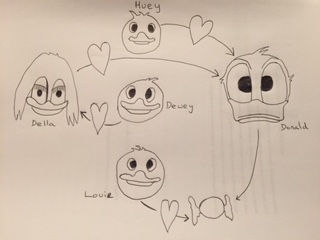 Although not explicitly shown in the masterpiece above, Huey, Dewey, and Louie each want their Uncle Donald to be happy. Because of this, and also because they believe he will be happy if (and only if) they behave well during a forthcoming visit to the cinema, they are all keen to overcome their mischievous nature and to behave impeccably throughout the trip. To this extent, then, they each share at least a superficial altruistic desire (i.e., they want Donald to be happy) and a superficial altruistic motive (i.e., to behave well because they believe this will promote Donald’s positive welfare; in this case, his happiness).

How we recognise superficial altruism largely follows from what has been said already and is relatively straightforward. We can infer Huey, Dewey, and Louie’s superficial altruism towards Donald to the extent that they: (a) desire good things for him; (b) anticipate being pleased when (desired) things go well for Donald and dissatisfied when they do not; (c) act to try to promote his positive welfare (as they see it) when doing so seems necessary and sufficient to bring about the situation they seek (e.g., Donald’s happiness) and efficient (i.e., when doing this does not interfere with things they value more); and (d) derive satisfaction when they think that (valued) things have gone well for Donald and are displeased when they have not. The more confident we are that Huey, Dewey, and Louie have such desires, expectations, motives, and reactions, the more confident we can be in our judgements that they are superficially altruistic towards Donald.

The term “superficial” in this context does NOT mean “unimportant”. Huey, Dewey, and Louie are concerned about Donald’s positive welfare and they are motivated to promote it. These are manifestations of the phenomenon I am interested in and want to understand. Other things being equal, I would prefer Huey, Dewey, and Louie to desire and to take reasonable efforts to promote Donald’s positive welfare than to not care (i.e., to be indifferent) about it, or to desire and seek to make things worse for Donald (i.e., to be superficially aggressive). This means that I would be well advised to both recognise superficial altruism when I see it and try to understand where it comes from. Being able to identify it is essential if it is to be studied well. Understanding where it comes from is likely to enhance prediction and control of it.

Notwithstanding the fact that Huey, Dewey, and Louie genuinely do have concern for Donald’s positive welfare (i.e., they are superficially altruistic), they nevertheless have different reasons for that concern.

Huey loves and respects his uncle and is sad that Donald has been down in the dumps for so long. The love, respect, and compassion he has for Donald means that he would be delighted if Donald were to enjoy a happy spell. What Huey really and truly wants is for Donald to be happy and (other things being equal) Donald being happy would directly add to Huey’s own happiness. Thus, we might say that Huey is deeply altruistic towards Donald.1 This deep altruism explains the reasons for Huey’s desires, intentions, and likely behaviour at the cinema, as well as his likely reactions to various possible events that eventually unfold there.

Dewey adores his mother, Della, and knows that she is worried sick about her brother, Donald. Dewey desires anything that he thinks will bring his mother happiness and is more than willing to do whatever it takes to bring this about. Dewey is sure that his mother will be delighted if Donald enjoys a happy spell. This is reason enough for Dewey to want Donald to be happy and to make efforts to bring this about. Thus, although Dewey does want Donald to be happy and is motivated to make him so, this is instrumental in service of what he really and truly (and deeply altruistically) wants: his mother’s happiness.

Louie loves nothing better than eating sweets. He particularly likes the pick-n-mix sold at the cinema. Louie knows that Donald likes to buy his nephews treats when he is happy – but only when he is happy. Louie’s passion for sweets is the main factor that needs to be grasped to understand why he intends to be well-behaved on the cinema trip. Thus, although Louie does want Donald to be happy and is motivated to make him so, this is instrumental to what he really and truly wants: happiness for his future self. Although his superficial altruism is real, deep down Louie is fundamentally self-interested; literally interested in the welfare of his imagined future ‘self’.

Understanding the deep reasons for it helps predict which changes in circumstances will affect superficial altruism, and why. Because Dewey’s real but superficial concern for Donald is contingent both on his love for his mother and his mother’s love for her brother, if Dewey falls out with his mother or she falls out with Donald, Dewey will have lost his (deep) reason to be (superficially) altruistic towards Donald. Similarly, if Louie goes off sweets or finds a better supplier than Donald, he too will have lost his (deep) reason to be (superficially) altruistic towards Donald. This is because Dewey and Louie’s concern for Donald’s welfare, while genuine, is not deep. Deep down, they care much more about other things that happen to lead them to care about Donald. This is not the situation for Huey. His superficial concern for Donald stems specifically from a deep concern for Donald. He cannot stop caring about Donald’s positive welfare without losing his love, respect, and compassion for Donald.

In the scenario above I have used “love, respect, and compassion” as an example (deep) reason for (superficial) altruism but it is important to recognise both that (a) this is actually a combination of possible reasons, each one of which alone might provide a deep reason for superficial altruism, and (b) there might be other deep reasons for superficial altruism not included in this bundle. I will say more about this elsewhere (including in “Final thoughts and further reading”, below).

In summary, to effectively identify, explain, and potentially control the phenomenon I am interested in, it is useful to distinguish between superficial altruism (versus superficial indifference and superficial aggression) and (various) deep reasons for that altruism.

This differentiation is best done at the ‘superficial’ level of whether or not people have such concerns.

1.      Another phrase that is sometimes used to describe ‘deep’ altruism is to say that Huey is “directly” altruistic towards Donald (or similar). This is then contrasted with “instrumental” altruism, which is where Donald’s positive welfare is desired, appreciated (to some extent), and sometimes sought not as an end in its own right (sometimes called an “ultimate” end) but as a means to some other end which is what is ‘really’ desired (with Donald’s welfare being desired only because of its instrumental value towards this other ultimate end). I really don’t mind what terminology is used as long as it is used consistently and constructively. A problem with the terms mentioned in this footnote is that, sooner rather than later, someone will argue that “ultimately” people only seek things they want and that ‘therefore’ everyone is “really only self-interested” (or some such) and “there is no such thing as altruism”. Thus, Duey for example does not seek Donald’s happiness as an ultimate end in its own right but ‘actually’ seeks it only instrumentally because he (correctly) anticipates that it will contribute to his own happiness, therefore he is ‘really’ self-interested and ‘true’ altruism doesn’t exist. Such arguments quickly become tiresome. More importantly, they lead to incorrect conclusions. They lose the crucial distinctions between “superficial” altruism, indifference, and aggression; between different “deep reasons” for superficial altruism; and between these two levels or foci of investigation.

Activities that may enhance understanding

1.      Think about other (‘deep’) reasons for superficial altruism and draw pictures to represent them. How would you draw Stewie anticipating feeling guilty if he doesn’t cheer Donald up? What about Phooey who is a passionate Ducks’ Rights activist who will feel proud if he can improve the life of even one duck? Or Zooie who believes that her God is pleased whenever she makes any duck happy? Or Kookie who wants to have Donald as a loyal customer and is sure that this will be facilitated if she keeps him happy? And so on.

2.      Listen to the Radiolab episode The Rhino Hunter (http://www.radiolab.org/story/rhino-hunter/). By spending $350,000, Cory Knowlton won an opportunity to kill a black rhino – which he subsequently did. Black rhinos are magnificent beasts and an endangered species. To what extent is Cory superficially and deeply altruistic (and towards who or what)? What is your evidence? What further evidence might help you decide? 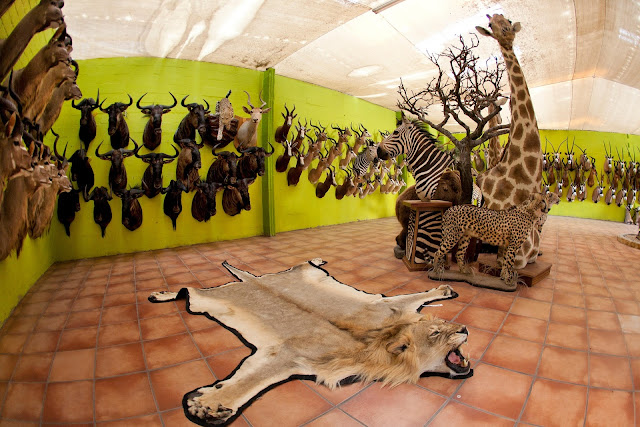 3.      Imagine that Huey, Dewy, and Louie want Donald dead and are willing to bring their wishes to fulfilment by joining in a hunt intended to kill him. Most people would be happy to call their desires, motives, and subsequent actions “aggressive”. Imagine now that Huey’s aggression stems from virulent hatred for Donald, that Dewey’s stems from a belief that Donald has a virus that makes him a potentially fatal threat to all who come into contact with him, and that Louie’s stems from a desire to earn the bounty that someone has put on Donald’s head. Do you now want to say that only Huey is ‘really’ aggressive towards Donald because Dewey is ‘really’ acting in service of his community and Louie is ‘really’ only acting in self-interest? How does your answer ‘fit’ with your intuitions about ‘real’ altruism?

One possible (deep) reason for (superficial) altruism is thinking that morality requires one to promote the welfare of particular others. Peter Singer’s commitment to utilitarianism, for example, gives him a reason to care about improving the welfare of those who will most benefit from his help. Having this as his only reason for action severely curtails how able Singer is to consider other concerns morally defensible, e.g., concerns for himself or for others who are not among those who would most benefit from his help. For details, see:

Another possible (deep) reason for (superficial) altruism is identifying with an in-group. If the identification is extreme, people can come to prioritise the welfare of the group over all other concerns. Two references relevant to this are:

Probably the most studied (deep) reason for (superficial) altruism is having compassionate feelings for another in need. The best treatment of this I know is:

Another possible (deep) reason for (superficial) altruism is wanting to think of oneself as a loving or good person and thinking that this requires caring about the welfare of others. Two references relevant to this are: